How a Start-Up Got a 42% Conversion Rate with Heyo

Cue the contest: Kyle ran a contest using Heyo’s Sweepstakes template for the first bag of roasted coffee to hit the States, and a choice of a handmade bracelet from Northern Thailand. Kyle set up the contest quickly, and the First Taste contest captured 188 views and 80 email addresses!

My campaign on Heyo was extremely easy to setup and use throughout the duration of the competition. The drag and drop template made it easy for me to upload pictures and choose the different features…It took me less than 20 minutes to set up my competition, and the campaign yielded 80 emails. 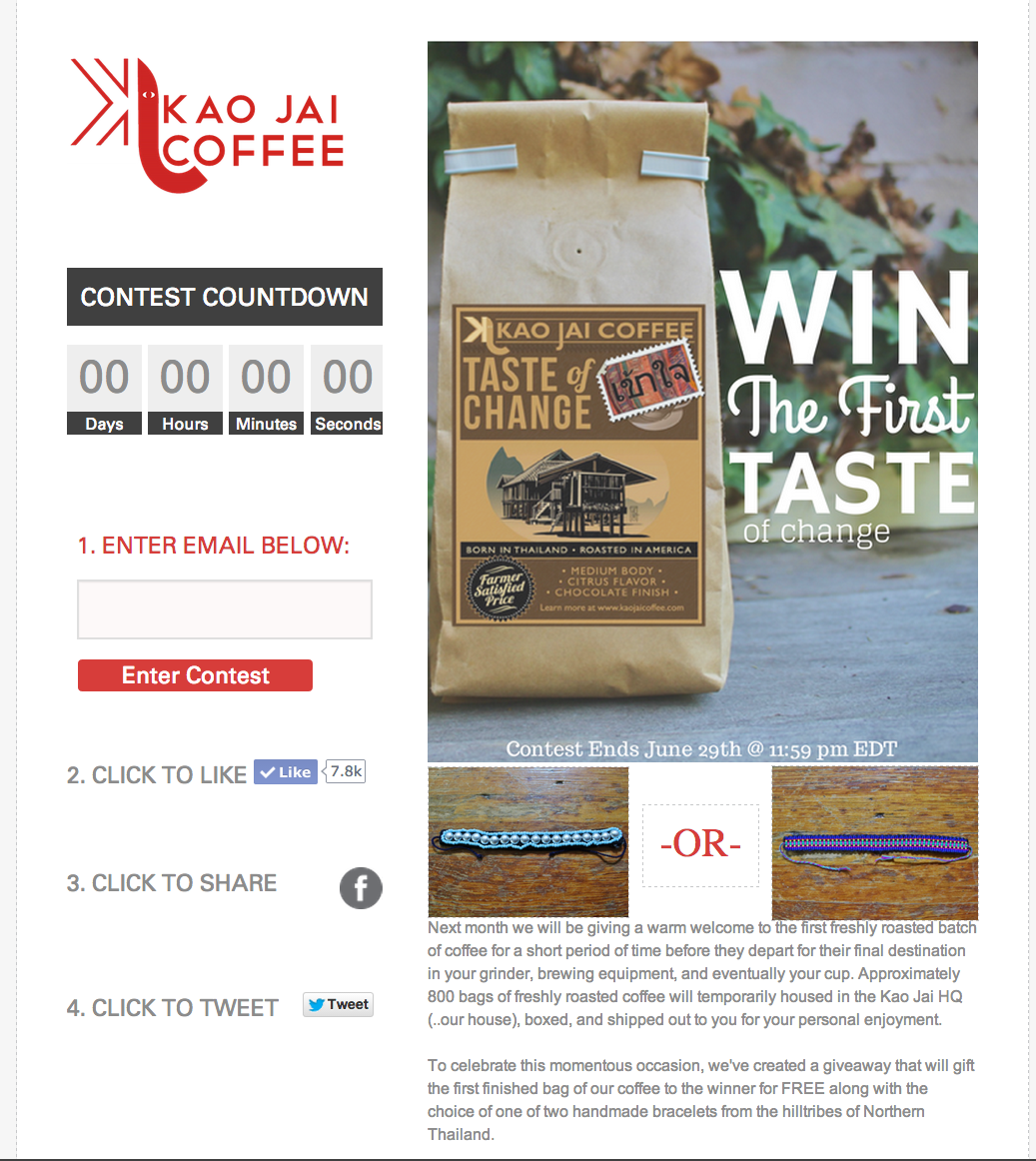 In his first contest, Kyle utilized three simple steps to running a successful sweepstakes. He selected an excellent prize that showcased not only his product, but the location of the coffee farms in Thailand. He created a sweepstakes with virality built in, and posted reminders on his timeline to create a sense of urgency. Finally, he followed up with his fans, letting them know who’d won the contest and promoting another deal regarding his prize.

Let’s look at each of these steps individually to see how it helped Kyle’s contest, and how the Heyo Sweepstakes template helped him achieve a 42% conversion rate.

First up is the Kao Jai Coffee prize. Kao Jai is a relatively new coffee company, and Kyle set up this sweepstakes as a way to celebrate the company’s first batch of roasted coffee ever to hit the States. Kyle chose to give away one of these bags, as well as a handmade bracelet from Northern Thailand. Because Kyle’s prize is relevant to both his fan-base and his business, his fans were more likely to enter and share the contest.

Second, Kyle took advantage of our easy-to-use Sweepstakes template to set up a simple, streamlined experience for his fans. All his fans had to do was enter their email address, share the contest, and voila! they were entered in the contest.

The simple layout of the campaign made it not overwhelming for potential and existing customers to quickly enter their e-mail to join the contest.

As sharing the contest is built into the steps, this easy entry also encouraged fans to spread the word about Kao Jai Coffee’s contest.

Kyle also created his own urgency by posting about the contest frequently during its five-day run. Posts like these serve a dual purpose – they are also a form of promotion, which is crucial to a contest’s success. Using Heyo’s smart URL, Kyle was able to ensure that 1) his fans were reminded about the contest frequently, and could easily get to the contest page, and 2) those one mobile devices were able to see his mobile-ready contest.

After the sweepstakes was finished, Kyle followed up with his fans. The follow up is extremely important, especially for new and smaller businesses; it continues to keep fans engaged with your fan page after the contest has ended.

In Kyle’s case, he also used it as an opportunity to further promote Kao Jai’s coffee by offering a special deal to fans of the page.

Above all, Heyo made running his first campaign simple and easy, especially because Kyle is working with limited resources.

I’ve committed to bootstrapping every aspect of my startup, so I have been doing all marketing in-house to save on costs. My highest conversions typically come from my newsletter, but I’ve found it extremely difficult to gather potential or existing customers’ e-mails by…just asking for it. This campaign gave me the opportunity to not only get people excited about the prize, but it also helped gain crucial contact information that will hopefully result in future conversions on our website.

Want to run a Facebook sweepstakes and capture emails like Kyle? Check out Heyo’s Sweepstakes template and start your own sweepstakes like the one in this case study by clicking here! Just put in your name, email, and create a new password to check out templates like this one for free.

How a Software Company Achieved 39% Conversion Rate with Heyo

Having a CAPTCHA is Killing Your Conversion Rate